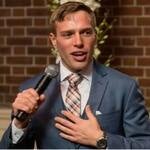 In 2016, Morgan established Counterpoint Legal, a general practice law firm which provides services in the following areas of Law:

Prior to starting his own law firm, he worked with Dependency Legal Group of San Diego (DLG) where he worked as a court appointed defense attorney in the child welfare system for five years and received multiple accolades during his stay.

2011. "Most Creative Closing Argument" bestowed on the individual in the firm of over 50 trial attorneys with the most creative summation at trial.

2014. "Outstanding Attorney Award", awarded for outstanding legal service and job performance at the DLG throughout the year.

Morgan attended St. Lawrence University earning B.A. in government, with minors in both education studies and global studies. He then earned his law degree in San Diego at California Western School of Law in two years.

In his free time, he enjoys golf, socializing, friendly competition, and hiking. He also spends time teaching SAT & ACT preparation courses for local high school students as well as tutoring for various A.P. classes. Additionally, he has a passion for fitness and competing in physique contests which he discovered through his own weight loss journey, losing about 120lbs between winter 2013 and winter 2015. He participated in the WBFF World Championships in Las Vegas in August 2015.

Thank you for contacting us. We will get back to you shortly.

Please complete all required fields below.

Counterpoint Legal is committed to answering your questions about Family Law, Child Custody, Support & Visitation, Adoptions, Juvenile Law, Guardianship/Conservatorship and Personal Injury Law issues in San Diego and Hagåtña. We'll gladly discuss your case with you at your convenience. Contact us today to schedule an appointment.